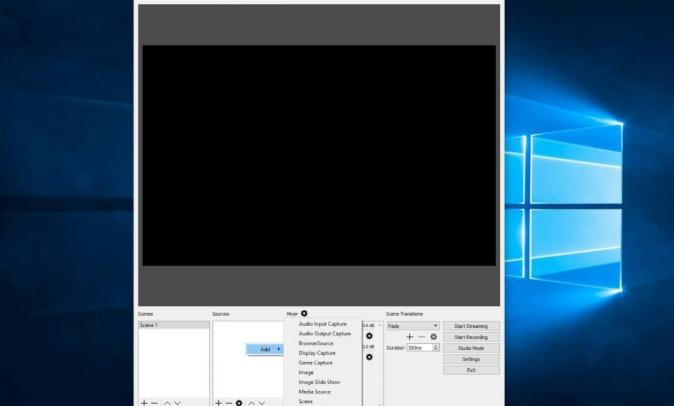 OBS (Open Broadcaster Software) window capture black screen on Chrome, Skype or other platforms that are in need of coverage can be quite annoying.

It could spring up at a time when you really need to record your screen with OBS in order to grab an important image or footage.

Nonetheless, like every software, there is still a possibility for error to occur.

The good thing is, the OBS recording black screen is not a permanent issue and can be resolved in no time just by employing one or two tricks.

We’ve outlined these solutions in the easiest steps that will get you through resolving this issue.

What is OBS Studio Black Screen?

OBS stands for Open Broadcaster Software and it helps in capturing what’s shown on a windows computer such as gameplay, photoshop footage, etc.

This footage can be incorporated at a later time in your live stream broadcast on Twitch etc. and as such, OBS has found an important use case on computers.

It’s even better when you consider how easy it is to install OBS since you can click ‘Add Source’ and follow other prompts for a complete installation.

Despite the great care and attention you may pay during this installation process, there is still a chance for OBS to break while in use.

The OBS game capture black screen 2019 effect is evident in the display capture not working on the windows in question or the inability to see what has been captured due to a black blanket on it.

Whether it’s on Chrome, then the Chrome Window Capture feature will be inactive and as such, your viewers will be unable to see these streams.

Why Does OBS Black Screen Occur

The OBS problem you’re experiencing is as a result of hardware acceleration.

For instance, Google Chrome relies on hardware acceleration which enables it to use your systems’ hardware in its proper functioning.

Chrome transfers a good number of graphical tasks to the system’s GPU and as such, the CPU is allowed to handle its own tasks.

If you have a computer with one of the best GPU, then it can ensure Chrome’s performance is not glitched.

While the latter might be expected on even one of the best systems, it is not always the case.

That being so, the culprit may be due to hardware acceleration and if disabled, can go a long way to combat the problem.

How Do I Fix Black Screen on OBS Studio on Chrome?

So, how do I disable hardware acceleration in OBS?

Here’s what you should do:

There’s another way to work your way around this, and that is by running OBS as an administrator on your Windows 7, 8, or 10 computer.

Most recent computers are built with two GPUS in a bid to provide enhanced performance and power saving.

One GPU is paired with the CPU while the other is a discrete GPU.

READ MORE  Essential Things To Consider When Choosing A Motherboard

If OBS is in a different GPU from the app you’re trying to record, it could lead to the black screen problem.

As such, a quick fix is by allowing both to share the same GPU.

There’s an optional step of allowing all apps to use the High-performance NVIDIA processor.

What this does is allow OBS and other apps that may be recorded to share the same GPU.

The downside is that more power will be consumed. If you’re ok with that, then proceed to:

If there are compatibility issues with your PC, then you can restore it to normalcy.

How to Fix OBS Capture Window Black Issue with Games

If the problem, on the other hand, is from games you’ve tried to capture, then there is a solution that can help.

In this case, you will capture the footage using the game capture feature instead of the Window Capture option.

The game mode is evident in Windows 10 creators update since 2017 and the feature can also be taken advantage of in this case.

Game Mode optimizes the way you play games but it can still pose certain problems as reported by many gamers.

Here, the Game mode can redirect the GPU’s resources form Windows 10 and as such, affect its seamless operation.

In order to disable Game Mode, do the following:

Your ability to fix OBS Window capture black can restore the full functionality to the software and enable it to operate without glitches.

We believe this and many more are what you’re trying to get to ensure that you can capture a region while on Chrome to use on Skype, Twitch, or YouTube streams as you may require.

It’s even better when you consider the fact that we have outlined more than one tip here to help you go through the processes easily.

Here’s a video you can also check out in order to get a perfect picture: